China made a small step towards reconciliation with Japan on Tuesday:

China has offered to repair Japan’s Beijing Embassy damaged in protests, but kept the heat on in a diplomatic row on Tuesday, saying it wanted UN protection for a Japanese World War Two-era germ warfare site.

China witnessed three weekends of violent rallies against Japan, with many furious about a revised Japanese school textbook they say whitewashes Japan’s wartime history and opposed to its bid for a permanent seat on the United Nations Security Council.

China is also showing concern over the growing number of demonstrators and the building intensity of the Anti-Japanese protests. The national news media made an official announcement Tuesday telling it’s citizens to keep from unapproved protests:

After weeks of sometimes-violent anti-Japanese protests, China’s foreign minister called on the public Tuesday to remain calm and to stay away from unapproved demonstrations.

Similar comments were made last week by Beijing city police officials, but Tuesday’s televised comments marked the first time a member of the central government had spoken out against the demonstrations.

“Do not participate in unapproved marches and other activities and do not do anything that will affect the social stability,” said Li Zhaoxing.

“Express yourselves calmly, rationally and in an orderly fashion,” Li said in a speech on Sino-Japanese relations given to government and military officials.

But… Japan’s Actions Did Not Help The Already Tense Situation. 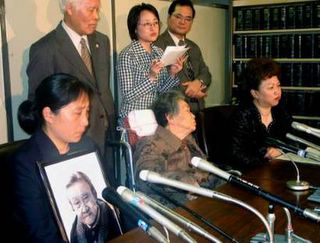 Japan will not compensate the survivors of the Japanese atrocities committed in World War II:

A Japanese court has turned down a lawsuit filed by the Chinese survivors of Japanese atrocities during World War II, a court official has told CNN.

The appeal for compensation by the 10 plaintiffs was in connection with the Nanjing massacre and other attacks by Japanese military forces, as well as the Unit 731 medical experiments — all of which happened in China.

The Ninjing massacre took place in China during a six-week period from December 1937 to January 1938 with as many as 300,000 people being killed after the Japanese Army captured the city of Nanjing.

The Japanese Imperial Army’s Unit 731, based in Harbin in northeastern China, developed biological weapons for use on Chinese civilians and conducted experiments on live prisoners.

Tuesday’s ruling is in line with similar court decisions, according to Reuters reports, but it comes as ties between the two Asian heavyweights have plumbed new depths.

And, to make matters worse, Japan on Tuesday announced to continue an annual trip to a military shrine in China:

Such developments would ordinarily infuriate the Chinese, but in the current atmosphere they could be explosive.

Sometimes violent, anti-Japanese demonstrations involving tens of thousands of protesters have erupted in several Chinese cities in recent weeks over a government-approved Japanese textbook that critics say whitewashes the country’s past militarism…

He said the visit was planned well in advance and had nothing to do with the anti-Japanese riots rocking China.

But Chinese Foreign Ministry spokesman Qin Gang noted that the dead honored at the Tokyo shrine include executed war criminals, whom he called the “planners and conspirators” of World War II.

“We hope the Japanese leaders could fully respect the people in the victimized countries in Asia, including the Chinese people,” Qin said in Beijing. He called on Japanese leaders to “refrain from doing anything that might harm the feelings of Asian people.” 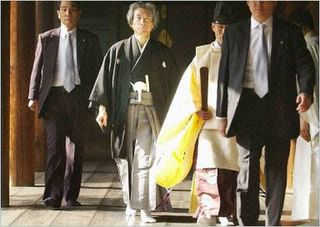 Koizumi has made several stops at the shrine, but this announcement could not have come at a worse time.

The visits have stirred debate in Japan and provoked protests from neighboring China as well as South and North Korea. All three countries suffered at the hands of Japan’s military aggression in World War II.