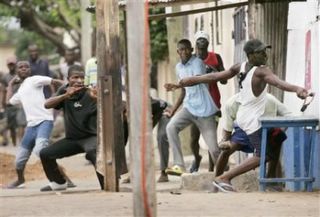 The Military went door to door in Lome to get people out on the street to clean the city:

Many of the people using dustpans, bare hands and bundles of reeds to clear the streets in Lome’s opposition stronghold of Be said they had been forced to work by police and soldiers, who stood nearby or watched from trucks mounted with machine guns.

The suburb of Be was the scene of the fiercest clashes between youths who erected burning barricades and hurled rocks at security forces firing tear gas and rubber bullets.

The violence erupted just minutes after Gnassingbe was declared victor on Tuesday.

Assou, 39, said the security forces were going house-to-house on Thursday and ordering people out to help clean up the barricades and spent tear gas canisters.

“They smashed in the door. They told us to get out and pick up the stones,” he said. 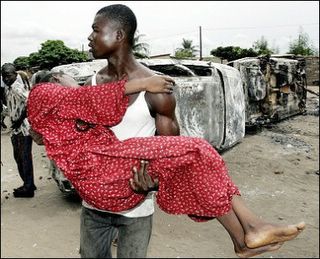 Carrying the Wounded between Clashes

Although some regional groups had certified the results, the US slammed the elections as “disturbingly” flawed:

The US said today that Togo’s presidential elections were disturbingly flawed but pressed for formation of a national unity government to resolve the African state’s political crisis.

“The legitimacy of Togo’s presidential elections in our view fell short of the aspirations of both the Togolese people and the expectations of Togo’s friends in the international community,” said deputy State Department spokesman Adam Ereli.
He cited irregularities in voter registration and voter card distribution prior to the election, and flaws in voting procedures he said raised “serious questions” about the provisional vote totals announced yesterday.

ECOWAS urges the formation of a new government:

The Economic Community of West Africa States (ECOWAS) on Wednesday urged all parties in Togo to halt violence and form a coalition government.

Speaking at a press briefing in the Nigerian capital Abuja, the ECOWAS’s Executive Secretary Mohammed Ibn Chambas said that “All the parties should pledge to form a government of national unity, this is the position of ECOWAS.”

He stressed that Togolese opposition leader Bob Akitani’s decision to declare himself president would not advance democracy in the west African country.

“Self-proclamation or unilateral declaration of presidency, with due respect, is not a democratic way of electing a president,” he said, adding “We call upon all Togolese to desist from unilateral action.”

Border tension reported with Ghana as children were shot at from Togo side of border:

Three people were injured when Togolese soldiers fired across the Ghana/Togo frontier at Aflao shortly after the declaration of the results of the presidential election on Tuesday. Mr King Kosmos 28, an artisan and two basic school pupils, Linda Donu, 10 and Mabel Ahedor, 13 are on admission at the Aflao District Government Hospital.