Some southerners in traditional dress carried shields and wore ostrich feathers, but most wore urban attire – jeans and T-shirts – at their first rally in the capital in more than two decades.

The parties will work on a new constitution:

A delegation of former rebels from southern Sudan has arrived in Khartoum, for talks on implementing the peace deal signed in January. The priority for all parties will be to agree on a new constitution – a process expected to take about six weeks.

This will lead to a coalition cabinet between Khartoum and the former rebels.

The peace deal put an end to a 21-year civil war between the Muslim-dominated government and fighters from the Christian and animist south. 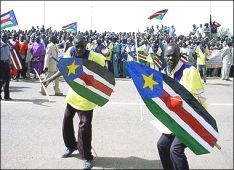 Greeting the SPLM Leaders in Khartoum

Guidelines and Conditions were drawn up in Egypt in January on the fomation of the government:

A preliminary peace agreement between GoS and the NDA signed on 16 January in Cairo, Egypt, determined that the ruling National Congress Party would have a 52 percent stake in the government, while the SPLM/A would have 28 percent. Southern Sudanese who were not SPLM/A supporters would get six percent, the NDA would have a 14 percent share and also participate in the country’s constitutional review.

Reports from Khartoum tell of opposition arrests after a different rally on Wednesday, April 6th:

A leading Sudanese opposition party announced Wednesday that the military-backed government had detained more than 30 of its members and suspended its legal status.

Five students were wounded and 27 arrested after police used batons to break up the anniversary rally, the Umma party of former premier Sadiq al-Mahdi said.

He said the crackdown was sparked by the party’s determination to mark the 20th anniversary of the overthrow of Jaafer Nimeiri’s one-party regime in 1985, which ushered in a brief period of multi-party democracy before the 1989 coup that brought President Omar al-Beshir to power.

“In late afternoon, students affiliated to the party gathered in front of the headquarters and, apparently in compliance with orders to prevent the celebration, riot police attacked the gathering, using teargas and batons, with the students throwing stones,” said Birair.

The government forces surrounded the opposition headquarters in the afternoon. The opposition has said that it will help the UN in war crimes investigations:

A senior official of the Umma party, led by former Prime Minister Sadiq al-Mahdi, attributed the police action to the party’s position in favour of cooperating with a U.N. resolution referring Darfur war crime suspects to the International Criminal Court.

An Umma Party official said the party decided to hold the rally in their headquarters after security forces told them they could not gather in a public square.

But the armed police were determined not to allow anyone into the party headquarters for a celebration.

“Leave or we will smash you on your head,” one security officer told journalists who tried to enter. “This is our country, not yours, get out,” he shouted.

Ahmed Ali Hassan, a state security officer who took television tapes from journalists, told Reuters the party did not have permission to hold the rally

Meanwhile, the UN has failed to recognize and prevent the crisis in Sudan:

“The new human rights council must be a society of the committed. It must be more accountable and more representative,” Annan said. “Ultimately it would produce more effective assistance and protections, and that is the yardstick by which we should be measured.”

Annan singled out human rights abuses in Darfur, saying that the situation there is a test for the United Nations, “as individuals and as an institution.”

Last year, the commission voted 50-1, with 2 abstentions, to express concern about the situation in Darfur, but stopped short of formal condemnation of Sudan. Even formal censure by the commission involves no penalties but draws attention to a country’s record.

The United Nations has called the situation in Darfur — where two rebel groups made up of black tribesmen have been fighting against the government for two years, prompting a rampage by pro-government Arab militiamen accused of atrocities against civilians — as the world’s worst humanitarian crisis.

An estimated 180,000 people have died in the upheaval and about 2 million others have been displaced since the conflict began in February 2003.