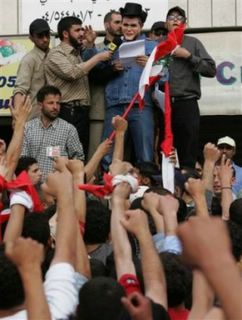 Hezbollah plans on staying in Lebanon and is upset with Kofi’s UN insisting that they disarm. Iran is also removing it’s Revolutionary Guard from Lebanon:

Iran has pulled out the vast majority of its Revolutionary Guards in Lebanon after two decades as a major player among the country’s Shiite population, most notably as the impetus for the creation of Hezbollah, according to U.S. and European officials.

At one point, Iran was estimated to have as many as 2,000 of its elite troops inside Lebanon. But today Tehran is reported to have from 12 to 50 military personnel in the country – and probably on the lower end of that range, the officials said.

Although the phased drawdown began more than five years ago, senior officials and policymakers at the State Department and the National Security Council, in both the Bush and Clinton administrations, said they were unaware of it – and were surprised to learn of the moves long after the fact.

As recently as this month, Washington continued to press for the withdrawal of Iranian as well as Syrian forces from Lebanon.

It is unclear whether Rice had been informed that most Iranian troops were gone, but other senior officials as recently as Friday estimated that Iran still had about 800 troops in Lebanon and did not know of the pullout until they inquired with U.S. intelligence sources. Iran has also not publicly mentioned a troop reduction.