The Opposition Party has told news sources that over 100 people have died in the aftermath of Sunday’s flawed elections. The Opposition has also agreed to talks with the government officials under certain conditions:

Togo’s opposition said on Friday it was ready to hold talks with international mediators to try to end a crisis in which it said around 100 people had been killed following the election victory of the late ruler’s son.

The main opposition coalition said any talks would have to be led by the African Union, European Union and United Nations and that the mediators would, as a first step, have to recognise that it had won Sunday’s disputed presidential poll. 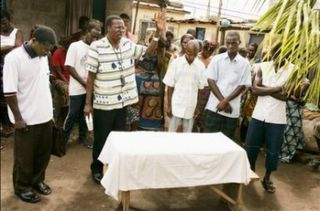 A funeral for a 6 year old boy who was shot and killed in the violence in Togo.

The west African regional bloc Ecowas on Friday condemned a firebomb attack on a German cultural centre carried out overnight by unidentified gunmen in the Togolese capital Lome.

“The Economic Community of West African States strongly condemns this act of lawlessness and hostility against a friendly and active partner of Togo and Ecowas,” said a statement released by the 15-nation grouping in Abuja.

Supporters of Togolese president elect Faure Gnassingbe have criticised Germany, accusing it of meddling in the crisis after its embassy gave sanctuary to Togo’s sacked interior minister, Francois Esso Boko.

Meanwhile opposition supporters focused their ire on Ecowas itself and citizens from other west African countries after the grouping’s election monitors endorsed Sunday’s election as having met international standards.

7,000 Refugees have fled the violence to neighboring Benin:

A new camp and dispatch of aid supplies are underway in Benin as the refugee exodus from Togo continues to grow. At last count, neighbouring Benin and Ghana had received close to 7,000 new arrivals in the last three days.

The situation in Togo’s capital, Lomé, is reportedly still volatile after violence broke out on Tuesday with the announcement of the election results. Since then, 6,263 people fleeing the general insecurity have arrived in Benin. UNHCR is currently assisting 1,300 of them – 700 at Come site and some 600 who are living on church grounds at the Hilakondji border. The rest are living with host families, given the close family and tribal ties between Togolese and Beninese in the southern area.

“Today, another camp, Lokassa, will be ready to receive about 1,000 refugees,” said UNHCR spokesman Ron Redmond in Geneva on Friday. “Water and sanitation are already in place and tents are being erected this morning by the Beninese army.”

Earlier in the day, government forces surrounded the home of an Opposition leader:

A military contingent surrounded the home of a Togolese opposition leader early on Friday, journalists said, a day after the opposition called for results handing the presidential election to the ruling party to be overturned.

At approximately 1am, several all-terrain vehicles and armed soldiers were deployed outside the residence of Jean-Pierre Fabre, secretary general of the main opposition Union of Forces for Change (UFC) in the West African country.

Publius Pundit is tracking this story. Here is the latest post. I have previous posts up on the situation in Togo here, here, and here.