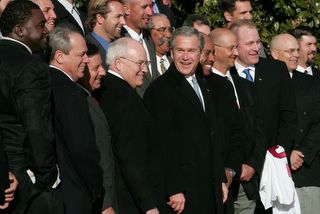 Curt Schilling (with shirt in hand) and The Boston Red Sox visited the White House today.

“Welcome to the citizens of Red Sox Nation,” said Bush. “Some have said it would be a cold day when the Red Sox made it here.”

Bush, a former owner of the Texas Rangers, had a lot of supporters and a few detractors in the lineup. Pitcher Curt Schilling, who presented him with a white baseball jersey emblazoned with his name and the number 43, campaigned for Bush.

Rep. Edward Markey, D-Mass. said Bush also apologized to Kerry for starting the ceremony without him.

So, his hometown team wins a World Series for the first time in eighty-some years and he is late to honor them? What’s up with that?