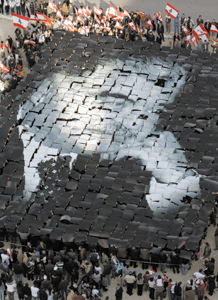 Opposition Demonstrators display cards in the likeness of Rafik Hariri at Beirut Rally.

After a UN report came out this weekend putting blame on Syria for creating the climate for the assassination of Hariri, news come out that the US is working openly with Syrian dissidents.

The Bahrain News is reporting that US officials are meeting with Syrian dissidents outside of Syria in an effort to weaken the Syrian Regime:

US officials held an “unpublicised” meeting with exiled Syrian dissidents in Washington to discuss ways of “weakening the Syrian regime,” a pan-Arab newspaper reported yesterday.

Saudi-owned Asharq Al Awsat said US officials who attended the meeting on Thursday included Elizabeth Cheney, deputy assistant secretary of state for Near Eastern affairs, and John Hanna, an official in the office of her father, Vice President Dick Cheney.

The paper said Elizabeth Cheney’s office confirmed the meeting, which was also attended by Pentagon and National Security Council officials, and comes at a time when the regime of Syrian President Bashar Al Assad is under mounting US pressure to end its grip over neighbouring Lebanon.

Asharq Al Awsat said the dissidents lobbied for a policy of regime change in Syria, whereas the administration officials focused on ways of weakening Assad’s government.