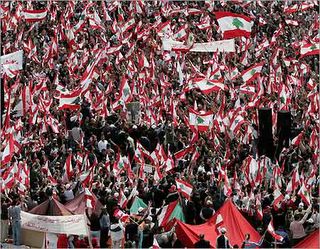 Rice Puts on the Pressure

The Bush administration is applying its strongest pressure to date on Syria, insisting on an immediate withdrawal from neighboring Lebanon and blaming terrorists based in Syria for last week’s deadly suicide attack in Israel.

Secretary of State Condoleezza Rice said Syria is “out of step” with growing desire for democracy in the Middle East. International resolve is firm that Syria must no longer hold political and military control over its smaller neighbor, Rice said Tuesday.

Assad said that Syria would pull out of Lebanon in “the next few months”, but that was not acceptable to the US and its allies who expect an immediate withdrawal. As the pressure builds one can only imagine the meetings that Assad and his men are having behind closed doors.