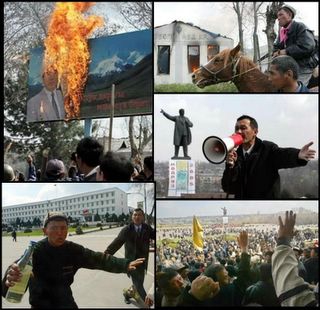 Originally, a couple of weeks ago, there was speculation that “maybe” by the time of the presidential election in October the protesters would mobilize into some show of force. Two weeks ago it would have been hard to predict what we have seen the last couple of days in Kyrgyzstan. Most experts were saying that the opposition lacked a common vision and leadership. Of course, much of the information coming from Kyrgyzstan at the time was from one of the government news organizations.

The Akayev government is also trying to mass their own rally in the capital of Bishkek today:

The Kyrgyz government invited people to attend a massive rally against the opposition to be held in the city center today. The governing power has called on the public to use common sense and not to lose control.

Comments today from the Election Commision did not help the situation any:

The head of Kyrgyzstan’s election commission declared today that the majority of the results in the country’s disputed election are valid.

Commission Chairman Sulaiman Imanbaev said the results validated 69 out of the 75 seats elected to parliament in the polls in February and March. “Today,” he said, “a new parliament has been born.”

The comments appear to deal a blow to opposition protesters, who yesterday took control of Osh — Kyrgyzstan’s second- largest city in the country’s south — after seizing the southern city of Jalal-Abad and the western city of Talas.

“Both sides realize that the present political confrontation might turn into an ethnic conflict that could split the country in two — the prosperous north populated mainly by the Kyrgyz, and the poor south with an Uzbek majority,” he says. In any case, Akayev will not resign in the near future as the opposition is demanding. “At present, the entire economy of the country is tied to his family,”

The Kyrgyz protests are developing differently than those of Georgia or the Ukraine. International organizations are urging caution and dialogue:

Although a revolution appears to be taking shape in Kyrgyzstan similar to the ones that erupted in Georgia in 2003 and Ukraine last December, experts suggest the violent street revolts rocking Kyrgyzstan could develop very differently from the democratic upheavals that brought peaceful change to the other ex-Soviet states.

“There is a quite open and obvious attempt to imitate Ukraine’s Orange Revolution by the opposition in these events, but the same methods may lead to very different results,” says Irina Zvigelskaya, an regional expert with the independent Center for Strategic and Political Studies in Moscow.

“There is a real danger that instability in Kyrgyzstan could unleash the pent-up forces of Islamic fundamentalism or ethnic conflict. It could turn down very ugly streets.”

Fianlly, with a government monopoly on the news, people in Bishkek are getting information from the south from “uncredentialed” oppostition papers.

For more on Kyrgyzstan check out Publius Pundit or Registan.net.