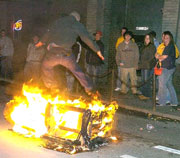 No, the picture above is not from Kyrgyzstan, although there were reports of looting and fires yesterday during and after the collapse of the Akayev Regime. This picture, however, comes from West Virginia:

West Virginia University on Friday condemned students and fans who celebrated the WVU men’s basketball team’s victory in the NCAA regional semifinal by setting about 50 street fires, forcing police to use Mace to control crowds.

Christopher Pala from the New York Times wrote this morning about the looting and violence in the aftermath of the dramatic Kyrgyzstan uprising yesterday. This remote country went through a “complete change of leadership” in “one historic day”. No deaths were reported in the city of Bishkek where these protests occurred (although, there were “unofficial” reports of police deaths in Osh in southern Kyrgyzstan in earlier protests). This was quite a remarkable revolution the world just witnessed! Granted it did not go off as smoothly as in the Ukraine, but in a country of five plus million, to “not” see great loss of life is the real story. But here in the West where we have our liberties, and where we have liberalism as a byproduct of our freedoms, the looting becomes the story in the regime change of a foreign land.

I am hoping that the New York Times can get Christopher down to Morgantown, West Virginia so that he can give his expert analysis on street demonstrations there. Can you imagine what will happen if WVU wins the next round?