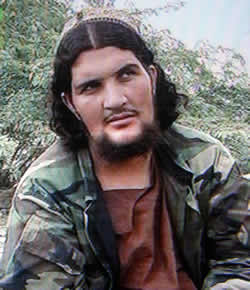 The Daily Times of Pakistan is reporting:

A spokesman for wanted tribal militant Abdullah Mehsud claimed on Sunday that the kidnapper of two Chinese engineers “died of his wounds” after a bullet pierced his chest in an Army commandos-led operation in North Waziristan Agency on March 5.

The spokesman for the one-legged militant, former Guantanamo Bay inmate, said the 28-year-old Abdullah was hit by bullets in his chest during the March 5 operation in which army claimed to have killed two foreigners and arrested 11 others.

“Abdullah’s comrades managed to take out the wounded commander and treated” at a place in Shawal area where the military launched another search operation in the same area on Sunday arresting 10 local tribal people, the spokesman claimed.

Abdullah Mehsud is one of at least 10 former Guantanamo Bay detainees who have been released only to return home to fight again with the Taleban and al Qaeda. He lost a leg in a landmine explosion a few days before the Taleban took Kabul in September 1996 and is known to ride by horseback or camel on his campaigns.

Update: Michelle Malkin , who is always on top of the latest, has linked to this in her “Shot Dead” post today.