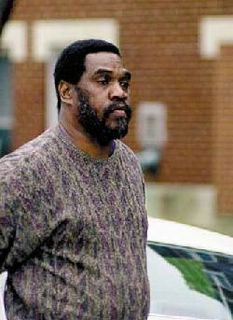 From the Belleville News Democrat:

The chairman of the East St. Louis Democratic Central Committee and four others were indicted on federal charges of buying votes in the Nov. 2 general election.

Charles Powell Jr., 61, (pictured above) who also is a city councilman, was charged with conspiracy to commit election fraud along with City Hall employees Jesse Lewis, 56; Sheila Thomas, 31; Kelvin Ellis, 55; and Yvette Johnson, 46.

They are accused of taking part in a scheme in which they paid East St. Louis voters between $5 and $10 apiece for their votes on Nov. 2, according to the five-count federal grand jury indictment unsealed Wednesday.

Powell, Ellis, Thomas and Lewis all are Democratic precinct committeemen in East St. Louis, and Johnson is a precinct worker.

The arrests came a day after three other Democratic precinct committeemen and a precinct worker pleaded guilty to related vote-buying charges in federal court.

Ellis is currently in jail for attempted murder of a government witness.

Kelvin Ellis, the East St. Louis director of regulatory affairs, conspired to discredit, then murder, a federal witness because she had threatened to expose a prostitution ring Ellis was running out of City Hall.

At the end of the 90-minute hearing in January, U.S. Magistrate Clifford Proud ordered that Ellis remain in jail, finding that the evidence arrayed against him is “powerful” and “compelling.”

Proud based the decision to keep Ellis, 55, in jail on a series of audio- and videotapes that Deputy Police Chief Rudy McIntosh, a government informant, secretly made in October and November while allegedly conspiring with Ellis to plant drugs on a prostitute and drug abuser known as “Jane Doe.”

Assistant U.S. Attorney Hal Goldsmith played parts of the tapes in open court to support his argument that Ellis’ plot to discredit Jane Doe spiraled into a murder-for-hire scheme. He argued Ellis poses a threat to the community.

Goldsmith said Jane Doe presented prosecutors with “an allegation that Ellis was running an escort service out of the Department of Regulatory Affairs.”