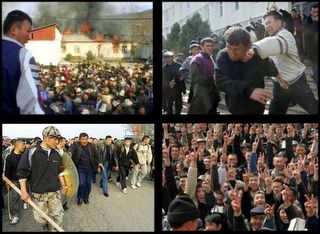 Kofi Annan Weighs in on Kyrgyzstan:

“The secretary general is opposed to the use of violence and intimidation to resolve electoral and political disputes,” the UN said in a statement on its Web site. Annan “calls on all parties to apply restraint.”

The AP is reporting on violent protests in the country’s south:

The anti-Akayev protests in Kyrgyzstan followed revolutions in Ukraine and Georgia as the latest outburst of anger against internationally criticized elections in an ex-Soviet state, and have forced the veteran leader onto the defensive.

On Monday, tens of thousands of protesters armed with petrol bombs and sticks drove police out of Osh, Kyrgyzstan’s second city, having gained the nearby town of Jalal Abad on Sunday.

In contrast to Ukraine and Georgia, where Russia backed the unpopular incumbents, former imperial power Moscow has stood back from the unrest in Kyrgyzstan. Russia and the United States have air bases near the capital of Bishkek.

Reports of Injuries Are Coming In:

“There were victims, mostly people who were in the building of Osh province administration when it was attacked. After the building was stormed, all of them were taken to the detention centre and some were sent to hospitals,” Ismailova said, adding that doctors refused to provide any information on the number of casualties or wounded. Local residents said they had seen dozens of people, mainly young men, with serious head wounds sustained when the building was stormed.