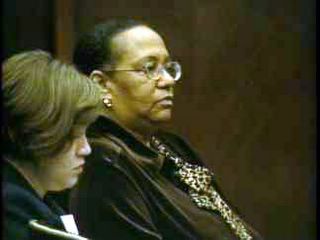 Four-year-old grand jury testimony was the highlight for jurors Wednesday in a fake voter registration trial. This morning, the jurors heard an audiotape of Montgomery’s testimony in front of a local grand jury –- testimony that is key to trial on perjury and tampering with evidence charges.

Norma Montgomery is on trial for perjury and tampering with evidence. Wednesday, jurors listened to Montgomery’s 2001 grand jury testimony. On the tape, Montgomery admitted bringing between 1,000 and 1,200 voter registrations to the St. Louis Board of Elections on Feb. 7, 2001.

Board workers were suspicious of some of the cards, but launched an investigation as soon as they spotted the name of longtime Alderman Albert “Red” Villa, who died in 1990. A later investigation showed that volunteers filled out multiple cards using one name, including the names of dead people, people too young to vote and filled out many cards with erroneous information.

Montgomery said that many of the fraudulent cards could have come from Operation Big Vote offices, based on the initials of volunteers who filled out cards and yellow or orange highlighted sections used in training.

She also matched initials on the fraudulent cards to volunteers, including several who pleaded guilty to dozens of election law violations in December. In all, six former Operation Big Vote workers pleaded guilty. One still faces charges.

“Well, I don’t have the ability to track the cards, I mean the registrations, once we give them to the Board of Elections,” she said in response to a question posed by a female grand juror.

Prosecutors say that Montgomery lied in that statement – that she had copies of the registrations but disposed of them after a Feb. 12, 2001 meeting in the campaign headquarters of Comptroller Darlene Green. Keena Carter, assistant Democratic director of the election board, and longtime political activist Pearlie Evans, who was Green’s campaign manager at the time attended the meeting and Green popped in and out, witnesses said yesterday.

Evans told jurors Tuesday that during the three-hour meeting, there had been a discussion about getting rid of the copies, but couldn’t remember who was involved. She had no trouble remembering that Green did not participate in that discussion, however.

Also, Wednesday, jurors were to hear from police who helped investigate the case.

They will also hear from St. Louis Controller Democrat Darlene Green whose campaign office was the site of a meeting to decide the fate of the cards which have never been found.

As of yet, there is no word on the testimony of Green or the police.

Update: Thanks to Lorie at the Great Polipundit for linking into this story.

Jim Hoft
Jim Hoft is the founder and editor of The Gateway Pundit, one of the top conservative news outlets in America. Jim was awarded the Reed Irvine Accuracy in Media Award in 2013 and is the proud recipient of the Breitbart Award for Excellence in Online Journalism from the Americans for Prosperity Foundation in May 2016.
BREAKING: Judge Timothy Batten Issues Order to Freeze All Dominion Machines in Georgia ...UPDATE: Judge Reverses Order Within Hours
Sidney Powell: The #KrackenOnSteroids Team Is Also Looking at Election Fraud in Virginia
FRAUD REWARDED IS FRAUD REPEATED: GA Secretary of State Raffensperger Approves Extended Mail-in Voting, Ballot Harvesting and Drop Boxes -- ASSURES DEMOCRAT STEAL IN GEORGIA RUNOFFS
If GOP Leaders Refuse to FIGHT NOW - Trump Supporters Will Abandon GOP and It Will Cease to Exist! -- Attorney Lin Wood Goes Off on Weak-Kneed GOP 'Leaders'
Republican David Valadao Defeats Dem TJ Cox in California's 21st District -- 3rd GOP Pick Up in the State and 13th GOP Pick Up in US House
See more...