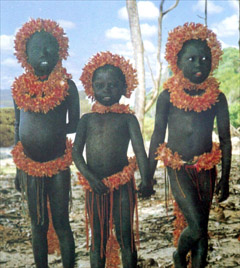 Tsunami Survivors from the Jarawa Tribe

The extent of the Christmas tsunami destruction may never be certain due to a number of reasons. Here are a couple of the more unusual cases for care providers. First, how does one give aid to the primitive native tribes of the Nicobar Islands off the coast of Burma and Thailand?

The worst-hit islands of Nicobar and Car Nicobar consists of the Nicobarese who are the largest Scheduled Tribe in the union territory, according to an official release.

The Nicobarese, 3000 of whom are still missing, have taken the brunt of the tsunami most due to its geographical location.

The southern part of Car Nicobar island, inhabited by the Mongolian-origin primitive tribe of Shompen, who were feared to have been hit badly by the tidal waves due to its proxomity to Sumatra which was epicentre of the massive earthquake, have now been confirmed safe by-and-large after an aerial survey, the release said.

The tribe, scattered over 17 villages with a total population of 398 (254 males, 144 females), managed to survive the tsunami as they had taken shelter in the forests of the biosphere reserves which acted as a shield against the high waves.

The Negrito-origin Andamanese, who inhabit the Strait islands in Rangat tehsil, with a population of 43 (24 males, 19 females) have been brought to safety to Port Blair and would require rehabilitation.

The aid workers decided that the tribes were doing ok after the natives started shooting arrows at the helicopters!

Meanwhile, there is still not much news from the military government of Burma. It seems that there is a superstition that if a big natural disaster occurs then there will be a new king. Maybe that is why the government is not letting the people know the extent of destruction. Also:

There is still no word on the sea gypsies. The secretive military government of Burma is reporting a total of 64 Burmese casualties. The government has not been open about the fate of hundreds of Salon or Moken people, so-called “Sea Gypsies,” expert swimmers and divers who mostly live as marine nomads on rickety boats, fishing by day and anchoring at night offshore from the 800 or so small islands of the Myeik Archipelago.

It is pretty hard for this midwesterner to believe that there are actually places like this that still exist!

Update: Thanks to the great Michelle Malkin for linking to this post and giving these people a voice. Michelle has also included links for those who would like to donate to these victims.