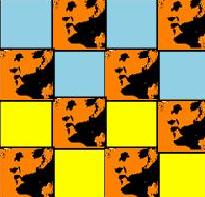 Viktor Yushchenko said he was happy to be alive after being taken ill in September during an election campaign.

On Saturday the doctors firmly linked his condition to poisoning.

Earlier Ukrainian prosecutors said they were re-opening an investigation into Mr Yushchenko’s illness.

In October, they had concluded that Mr Yushchenko was suffering the effects of a virus.

On Sunday, Mr Yushchenko said the regime which had been in power for the past 14 years was now into its last days and the world had seen a “different country”.

“Now every corner of the world knows Ukraine,” he said.

(Oh… if you’re wondering why I am using this image, you’ll have to scroll down and read the previous post with this image)