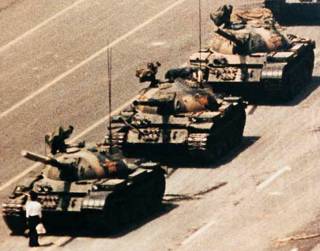 I am a man of freedom.

My prayers are with you, my brother,

My hopes are with you, my brother,

My dreams are with you, my brother,

…until your day of freedom comes.

A factory worker who helped to organize a strike during China’s 1989 pro-democracy protests has been released after nearly 15 years in prison, a U.S.-based prison rights group said Saturday.

Chen Gang (search) reportedly was convicted of “hooliganism” and sentenced to life in prison following the violent crackdown that ended the 1989 protests centered on Tiananmen Square (search) in central Beijing, the Dui Hua (search) Foundation said.

Chen was released in April after the government reduced his sentence several times, the foundation said, citing information it said it had just received from China’s Justice Ministry.

The announcement highlighted the detention of people sentenced to long prison terms after the 1989 crackdown. It wasn’t clear how many were still behind bars on charges of counterrevolution.